GET FLAT 5% OFF ON ALL PRODUCTS In our  last episode we fix the beat up walls of our garage, and today we're adding storage that can help us turn this tiny space into a workshop and still allow us to fit both of our cars at the same, the dream! So this is what we started with. Some of the storage came with the house and some we added ourselves but it was a hot mess. Our plan is to wrangle the clutter with metal pegboards, floating shelves and a track system. We'll also ditch and shuffle around the existing storage and DIY a few things along the way. So let's get started! Pegboards were first on our list.

The ones that came with the house were beat up and oddly spaced out. So we bought six steel Wall Control panels on Amazon for our new pegboard wall. To do this project you'll need pegboard panels, a stud finder, a level a power screwdriver, and screws. Our studs were too far apart, so we also got 3 1x4's to bridge between them.

To install, first find your studs, and mark where they are. Then attached the 1x4's to the wall horizontally, screwing into each stud. We did three rows because these pegboards have three attachment points.

Now you can attach your pegboards no matter where your studs are. Plus these have a built-in stand off so you don't lose any space by attaching them to the boards. screw them into your one by fours and you're good to go.

Then it's just a matter of hanging stuff up. I don't think we've ever had this much fun putting away our tools.

Next we tackled our shelves. The old ones were fixed in place with brackets and couldn't hold much weight. We found a rail system from Everbuilt that's adjustable and can hold all of our stuff. To install them we needed the rails and brackets themselves, a stud finder, a level, a drill, screws, and six 6 foot 1x12'x for the actual shelves.

First we had to find the studs. What? There are no studs above five feet. Ours were super wonky so we went with Plan B another wall with normal studs. We marked them at different heights and used a level to draw vertical lines down the marks. This ensured our rail would hit a stud with each screw. Then we screwed two rails into the two studs we marked. The brackets hook right in and we rested x12s as shelves directly onto them. We're excited about the system because it'll be so easy to adjust in the future if we need to. We plan to use these for stuff like safety gear, product supplies, and miscellaneous hardware.

We also installed short rails above our pegboards for extra wood and stuff we don't use as much. Next we installed a Rubbermaid Fast Track system for long items like our shovel, broom, that sort of thing. To install this you'll need the track system, hooks for it, a level, a stud finder, a power screwdriver, screws and a 1 by 4 to the bridge the studs. We screwed the 1 by 4 into our studs, mounted the rail to the 1 by 4, and added the track cover. The system is awesome because there are so many different hooks you can choose from. we snapped on the hooks and then got to work getting all our big items off the ground. It can even hold super heavy stuff like our ladder. After installing our new storage systems, we gave some love to our existing ones.

First we spray-painted our chipped wire rack in semi-gloss white, and re-hung it in the same spot. We used extra paint from our walls our cabinets. They used to be a flat white paint which you can't really tell in the video but it got dirty really easily. The cabinet knobs needed layers of paint sanded off them, so we chopped off the heads of a machine screw that matched our knobs and popped it into our drill. Then we spun it emery cloth to sand off the old paint. We spray-painted them semi-gloss white, let them dry, and screwed them back in. They're not perfect but this is the best these cabinets have ever looked. Next we scooted are giant Uline shelf back where it used to be to the left of the cabinets and filled it with our large heavy items.

We also turned an old dolly into rolling storage for under our Uline shelf. We added 1 by 4 spacers to bring the middle level with ends and screwed some plywood on top. It is perfect for heavy tile, it's awesome. Then we placed our rolling wood cart to the right of the cabinets. Using the same shelving system as before, we added a drying rack under our work table for products. Then we rolled our work table under the cabinets and it was a perfect fit!! And now the moment of truth: can we fit both of our cars? My battery's dead It feels so good to be organized! We made a place for everything, and now we have the space to use our garage as a workshop. Plus it looks so much better. 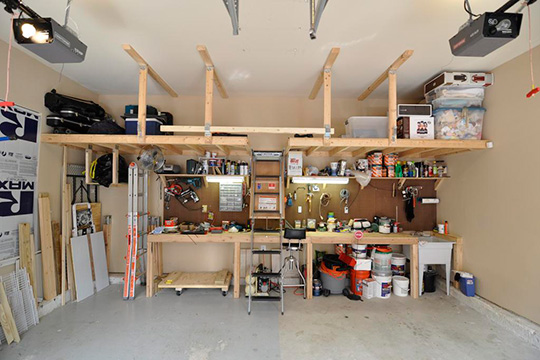