This article is reprinted from this website, for more details, please refer to this blog.

This post is part of my Behr DIY Expert series and I did receive paint products to use for this project.  As always, all opinions are 100% my own.

If you have been following along on Instagram, you may have gotten a few sneak peeks at our garage that I have been working on for July’s Household Organization Diet.  I just have one light fixture left to install and then  I will officially be able to call it done!  I’ve already showed you how to paint a garage floor and our pallet sports organizer, and today I am going to show you our sports pegboard organizer.

UPDATE: You can find the tutorial to build a pegboard wall HERE. 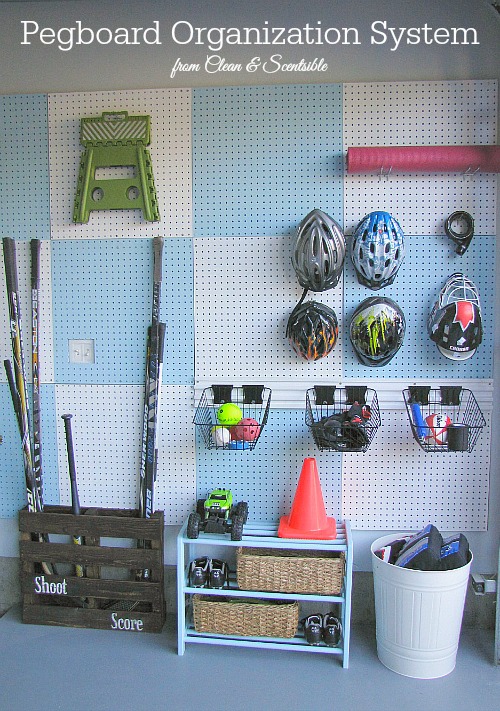 We have a lot of various sports equipment that we store in our garage – both for the kids and for Dave and I.  Unfortunately, we weren’t able to find most of it.  When we started to sort through the space, I knew that I wanted to organize all of the sports equipment in one place as much as possible.  I also wanted to make sure that the kids would easily be able to reach everything on their own {both for taking down AND putting it away!} so I was not constantly being asked where stuff was.  We ended up choosing this wall to work with… 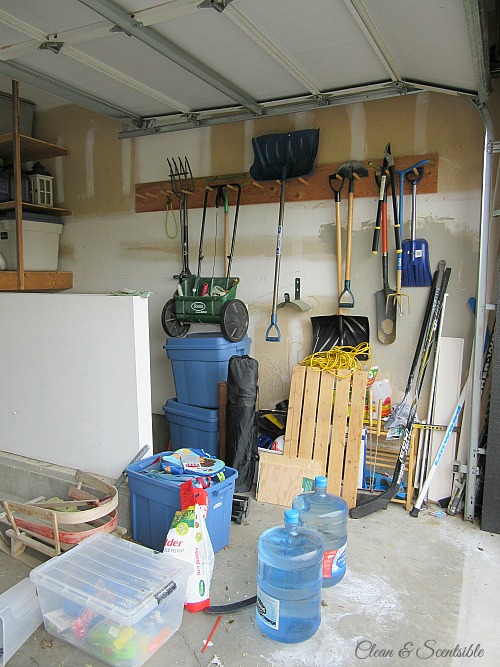 The scariest thing about this photo is that it was actually taken AFTER we had already moved a bunch of stuff.  Not pretty.  All of the gardening tools got moved to the opposite wall {which I will show you in another post}, the wall was painted with Behr Marquee River Veil and we were ready to get going on our pegboard organizer! 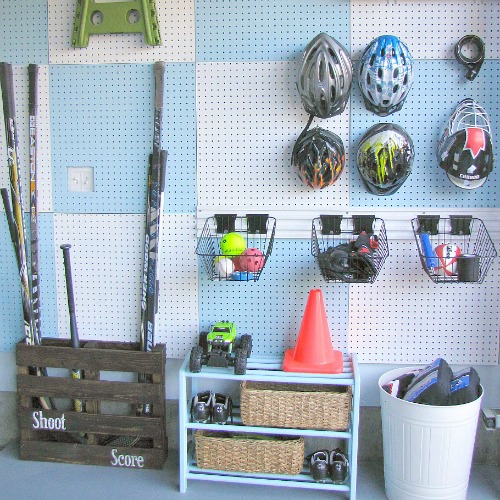 The pegboard system was painted using Behr Marquee Interior Paint in Balboa and Pure White and measures 6 feet x 8 feet {I will be posting the tutorial within the next few days!}. While we used our pegboard for organizing sports equipment, it can pretty much be used to organize anything – tools, gardening equipment, craft supplies – you name it!

Here’s a closer look at how we set up ours… 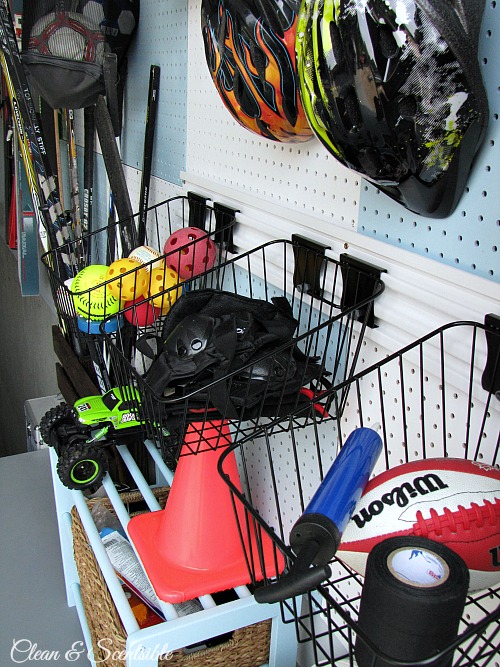 We purchased all of our hooks and the baskets from Home Depot.  The baskets were a bit on the pricier side, but since everything else was so inexpensive, it was my one splurge!  The baskets hold small balls, knee and elbow pads, hockey tape, the air pump, and a few other odds and ends. 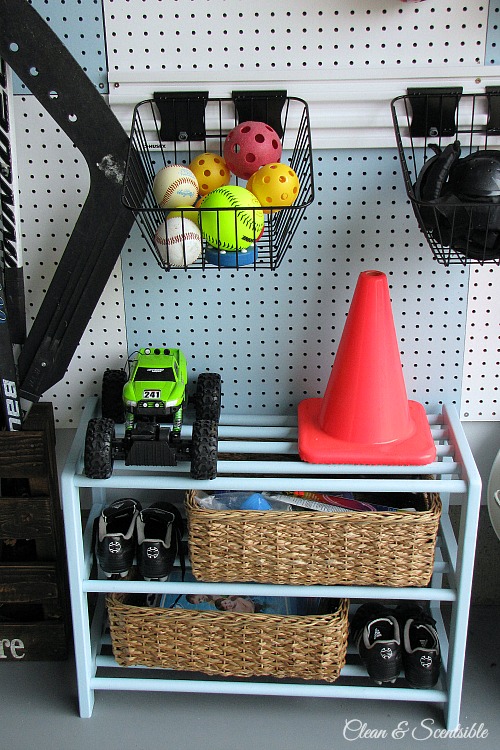 I painted an old shoe rack in Behr Marquee Balboa to match the pegboard and added some baskets for little items that we didn’t want to hang.  It also works to hold the boys’ cleats. 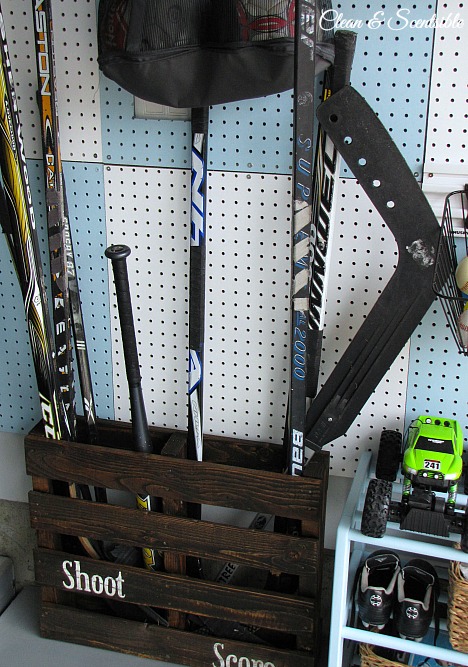 The pallet organizer holds all of the kids hockey sticks, baseball bats, and the occasional light saber or pirate sword.  It’s probably one of my favorite things in the whole garage. 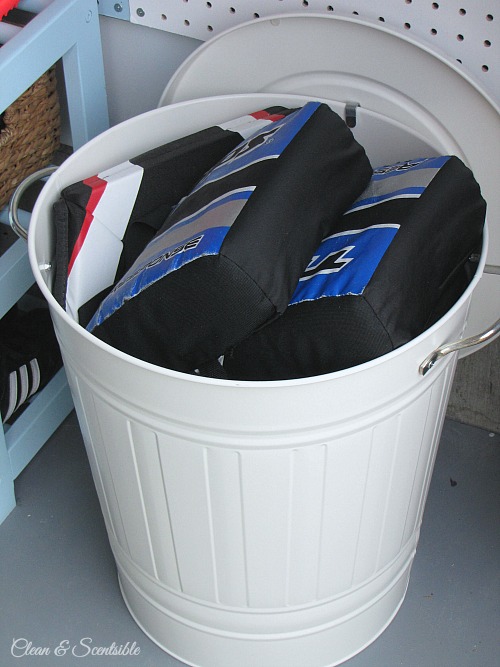 I purchased this cute little garbage tin from Ikea and it fits the kids’ street hockey pads perfectly. 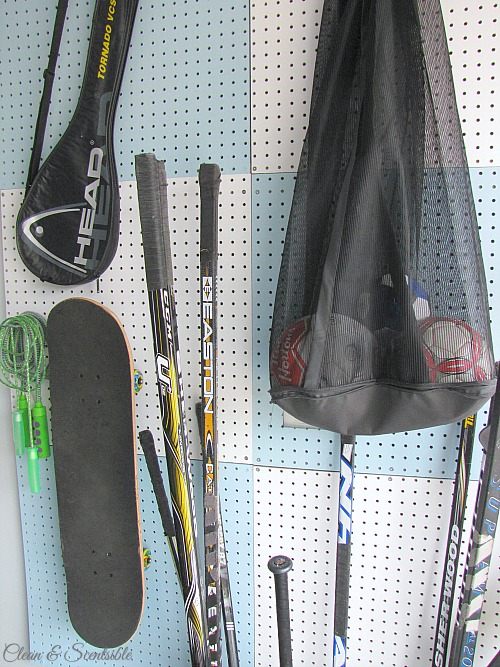 I found this ball bag at Target to hold our soccer balls and footballs.  It has a little zipper at the bottom that you can open up a bit to get out the ball you want without having to take the bag down. 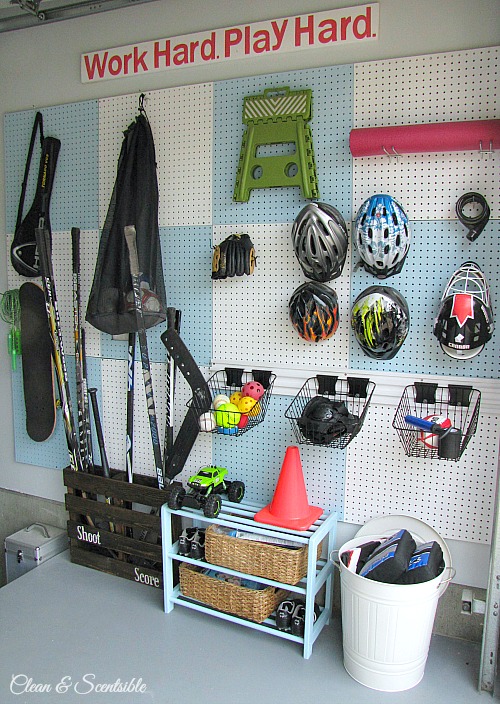 And there you have it!  The only thing that is not included in this space is our rollerblades {that we have stored in a Rubbermaid tote} and our ice hockey gear {which we each have in our own hockey bags}.  I’ll show you where we have this stowed when I show you the rest of the garage. 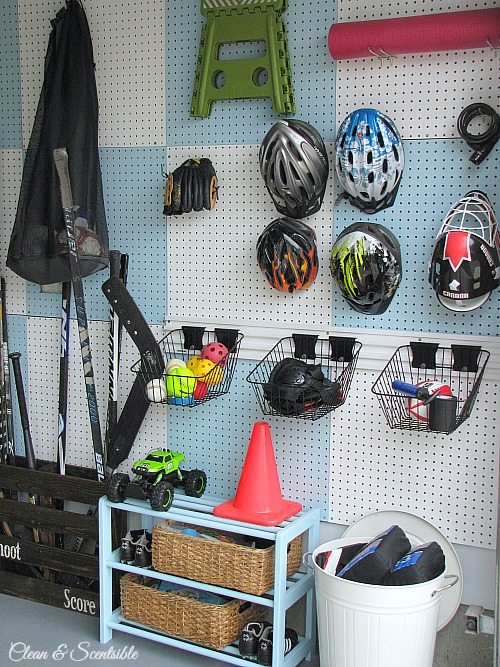 And, in case your were wondering, we just have our bikes parked up against one of the other walls.  We had considered mounting them to a wall; however, we wanted the kids to be able to access them whenever they wanted and a wall system would just not work for this. 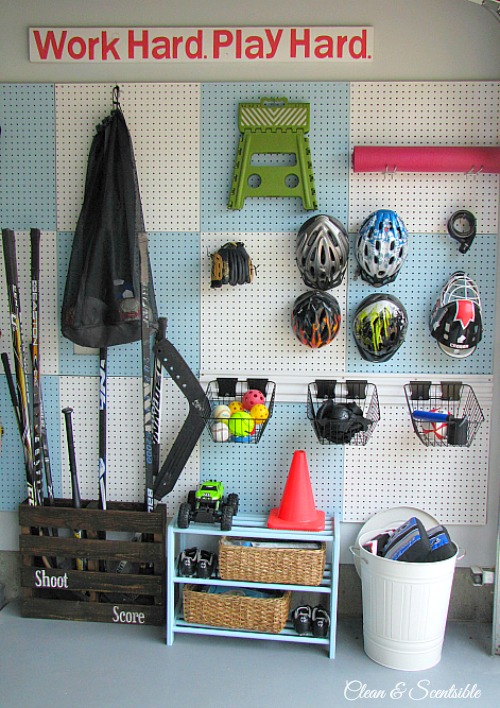 This post is part of my DIY Behr Expert Painting series.  Look for a new painting project each month! 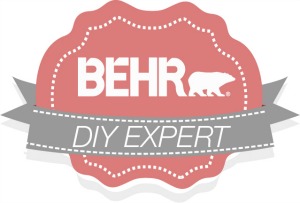 For more garage organization ideas, check out this post…