Before we jump into the tour, I wanted to mention that I put together a little garage organization planning guide that is full of tips and printables that will help you organize your own garage project so you can grab that by clicking on the link in the description below. 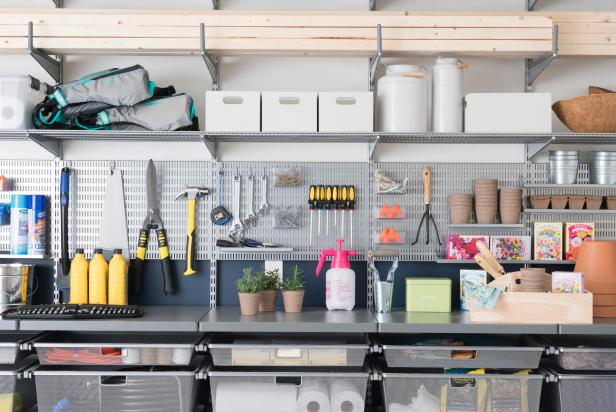 Let's jump right in starting with the left wall of the garage. The first section in our garage is dedicated to our lawn and garden tools. Since Donnie mows, fertilizes, and uses the weed whacker just about every week when the weather is nice, it was important to have all these tools in a spot that is easy to reach and within close access to the garage door so he can get everything outside. We decided to go with the IKEA ALGOT shelving system with metal shelves throughout the garage. We liked that the shelving attached to the wall rather than sitting on the floor since our garage floor is a bit slanted. We had also considered the Elfa system from The Container Store, but when we compared prices, we ended up saving thousands of dollars by going with ALGOT. We have used the ALGOT system in 7 closets between the two houses we've lived in and it has always held up well for us so we were confident that it would be a great fit for our garage as well. For larger and more awkwardly shaped items that needed to hang, we use the Gladiator brand track system, which allows us to add various types of hooks to hold all sizes and shapes of items. This made it easy to store things like weed whackers, shovels, rakes, and sprayers. Donnie had requested a work surface for the space for when he's working on projects in the garage, so we put in a standard ALGOT shelf on this segment of the wall, with a stool that stores neatly underneath. We also included an IKEA SKADIS pegboard where we can clip up notes for projects we're working on and hold pens and other small supplies. This section of shelving also holds many of the boys outdoor toys along with some of our beach and camping supplies. These are just simple aqua bins from Target but I love that they added a fun pop of color. I labeled the bins with my Silhouette machine and adhesive vinyl--- you can see my video about making labels with a silhouette for more details. We were sure to keep the boys items down low so that they could reach them easily when they go out to play. The items we used less often are up higher. Bikes were one of the things that we knew would be trickier to store since they are awkwardly shaped and take up a lot of room. We needed them to be out of the way but also easy enough to get to that it wouldn't be a pain when we wanted to use them. We decided to go with a Gladiator track again and they had the perfect attachment that allows us to get the bikes up and down easily.

We are a hockey family so one of my top priorities for our garage organization project was to figure out a way to store all of the smelly hockey gear that had infiltrated my house.

First we used wall hooks to hang up the net that we use in the driveway, along with a yellow shield that acts as the stand-in goalie. We made sure the net was up high enough that the hood of the car would say under it but low enough that it was easy to grab. Two more sets of wall hooks hold all of the hockey sticks below the net.

The next part is my favorite because it holds all of the hockey bags which used to inevitably end up in my dining room or our guest room. These are still the IKEA ALGOT shelves, with our boys’ bags on the lowest shelves so they can get them up and down themselves. Above Caleb's bag, we installed some hooks where we can hang sweaty gear to air out. If you have ever smelled sweaty hockey gear you understand why this was necessary. IKEA makes these nifty little baskets that hook right on to the ALGOT rails, so I was able to store a stash of hockey puck there so the boys can grab them easily. Donnie uses his hockey gear less often so it's fine up high. It's easy for him to grab the ladder to get the bag down when he needs it. We also have a few bins of spare hockey gear that we're waiting for the boys to grow into. Donnie had been storing his fishing gear in his office and in our master closet so we wanted to make sure to give it a better home out here in the garage. For some reason he didn't like the idea of storing his fishing gear in cute aqua tubs ( I have no idea why!) so we got these gray ones for him and they are working out well. The rest of the top row shelves not taken up by his hockey bag holds the remainder of his fishing gear in a couple of coolers. The final section of the shelving on this wall has several shelves for all the shoes, skates, and roller blades. We keep our day-to-day shoes inside but our muddy shoes and boots are stored in the garage along with rollerblades for everyone in the family and my ice skates since I don't keep them in a hockey bag.