A STEP BY STEP GUIDE TO PLANNING A GARAGE ORGANIZATION PROJECT

A STEP BY STEP GUIDE TO PLANNING A GARAGE ORGANIZATION PROJECT

This article is reprinted from this website, for more details, please refer to this blog

Overwhelming. If I had to boil down a garage organization project to just one word, “overwhelming” would be it. For some reason the garage seems to be a magnet for random junk we don’t really know what to do with, causing it to quickly become a huge mess that seems completely intimidating to try to rectify.

Take Exhibit A, for example– our garage in January-ish 2018: 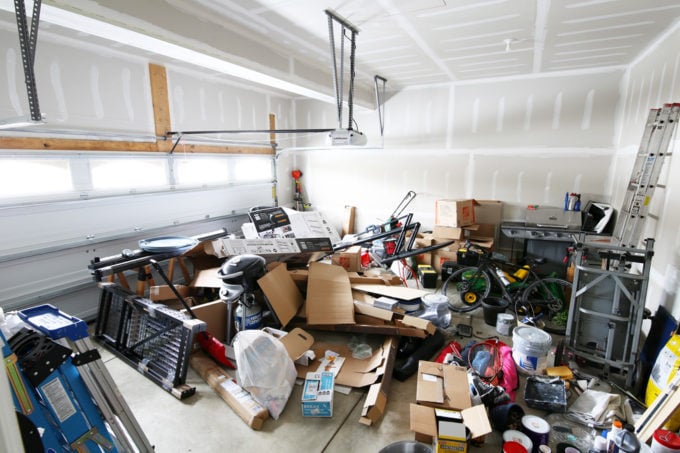 It was bad, y’all. Every time I walked out there I would cringe. I wanted so badly to have a beautiful, organized garage that we could actually park our cars in, but every time I would head out there to start organizing, that feeling of overwhelm would start to creep in, so I would suddenly remember some other important things I needed to be doing instead and abandon the project.

But then as summer was wrapping up, I started to realize that it was going to be getting cold soon. And the thought of spending another winter parking outside in the frigid tundra of Pennsylvania was worse than the thought of actually tackling our mess of a garage, so I knew that I just needed to suck it up and do it.

I’m thrilled to say that our garage is done (and we will be sharing the big reveal soon!), and though it took a while because we worked on it on and off, a little at a time, the actual process wasn’t as complicated as I expected it to be.

I thought I would walk through the steps we took to organize our garage and make the process a lot less overwhelming. I also created a nifty little garage organization project planner with cheat sheets and printables you can use if you’re planning on doing your own garage project, and you can get it for free by clicking the button below:

HOW DO YOU ORGANIZE A GARAGE?

STEP 1- GET RID OF ANYTHING THAT DOESN’T ACTUALLY NEED TO BE STORED IN THE GARAGE.

One morning while my kids were at school, I went through every single thing in our garage so I could get an overall picture of what we were working with. What I found was that there was a ton of stuff that we could get rid of that didn’t really need to be kept in the garage at all.

Trash. There was a bunch of stuff that was obviously trash/recycling. So I put the trash into bags, broke down boxes and prepared them for recycling, and got all of the true “junk” out of the way.

Donate/sell. There was also a bunch of stuff that I knew we weren’t using anymore that could be either donated or sold. We found new homes for our old (still working) grill and a huge basketball hoop that our boys weren’t using. We gave away some large saws and tools that Donnie didn’t use anymore. Being able to clear out several large items was another huge win and left us with more space to work with in our garage.

Relocate. A third type of item that I found in our garage were items that were actually better stored somewhere else. For example, I found a bunch of Donnie’s tools that had never been unpacked from when we moved that should actually be stored in his workshop in the basement. 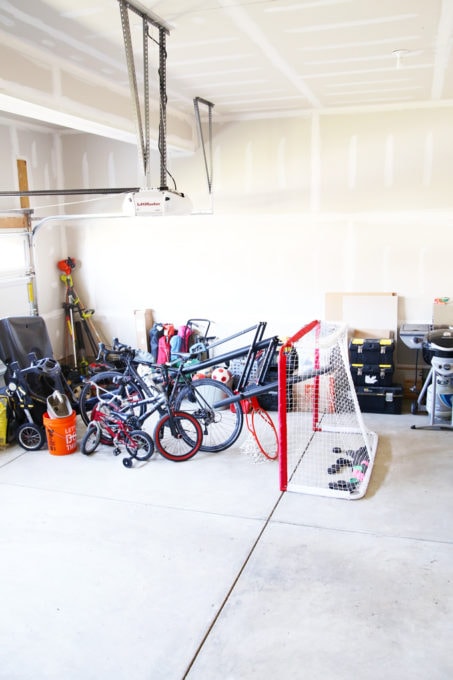 …and made my next step even easier…

STEP 2- PUT LIKE ITEMS TOGETHER SO I CAN SEE WHAT I HAVE IN EACH CATEGORY.

After we got rid of all of the items we could throw away, donate or sell, or relocate, the job of organizing the garage already seemed much more manageable. My next task was to sort the items we had left into categories so that I could figure out what storage systems would work best in our space.

I went around and physically put like items together in little (or sometimes big!) piles so I could more easily see what I was working with. When I was done, I made a list of each category and wrote down the major items in each one so I could plan out storage for them.

The categories I ended up with for our garage were:

STEP 3- MAKE A PLAN FOR WHERE EACH CATEGORY OF ITEMS WILL GO.

When we were organizing our own garage, it made the most sense to create “zones,” areas where we would keep all like items together and make them easily accessible. (all of the sports equipment together, all of the cleaning supplies together, etc.)

To figure out where each zone should be located, I thought through a series of questions…

The answer to this question would determine which categories of items we would store closest to the garage doors.

We decided to put our garbage cans right beside the garage door on the side of the garage that is nearest to the door into our house so that we could easily put our trash bags in them and also have easy access to take the cans out to the street on garbage day. 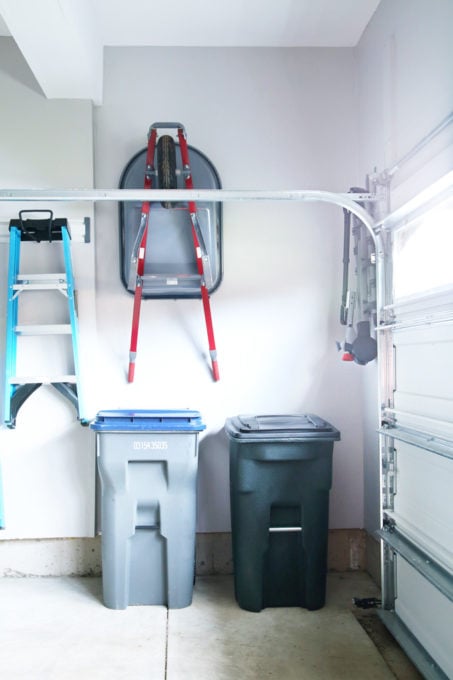 On the far side of the garage, we put the lawnmower and other lawn care tools near the garage door since we use them on a weekly basis in good weather and wanted to be able to get them out of the garage easily. These won’t necessarily be the “right” answers for everyone, but it made sense for us! 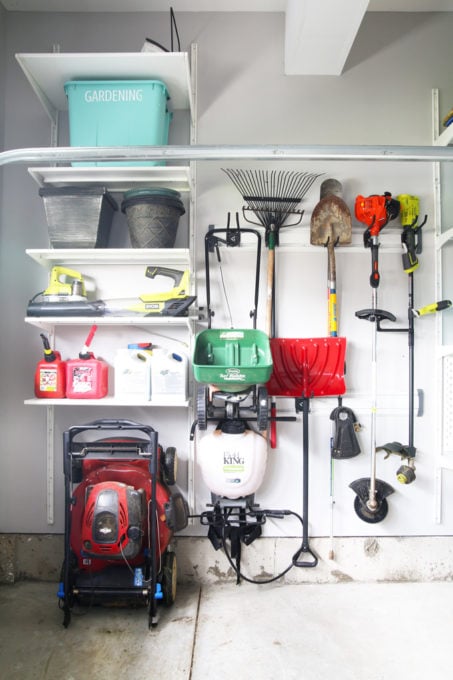 The answer to this question would determine what we would keep right by the door going into the house.

Since we don’t have a “cleaning closet” inside the house, I knew I needed to keep things like my broom and spray mop out in the garage, but they would need to be close to the door so I could grab them quickly. 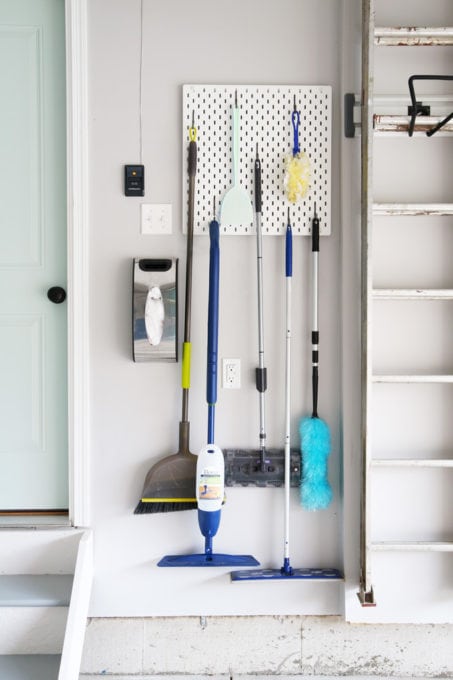 There were certain things that our kids would need to be able to get to without help, so they would have to be stored lower in the garage. For us this meant hockey bags and their most used outdoor toys would go down low. 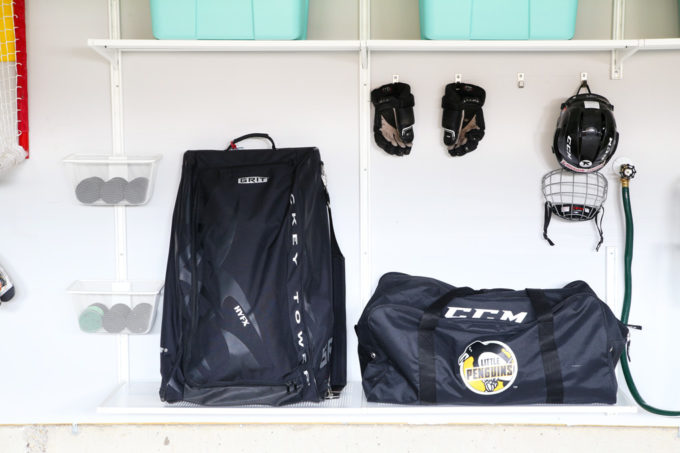 Ideally we would have every single item within our reach, but since garages typically have some useable vertical space, there are some items that are going to end up being up high and out of reach.

When we were deciding what went where, we tried to keep the items we use often (like lawn and garden tools) down low and items we use only occasionally (like fishing gear) on the higher shelves.

Sometimes the shape of the garage will cause some limitations when it comes to storage. For example, our garage has a bump out on the one side that limited the width of our garbage cans and that meant we would have to store something narrow-ish in that space so that we would still have room to open up the car doors. We had to make sure we took the layout into account when we were planning our “zones.” 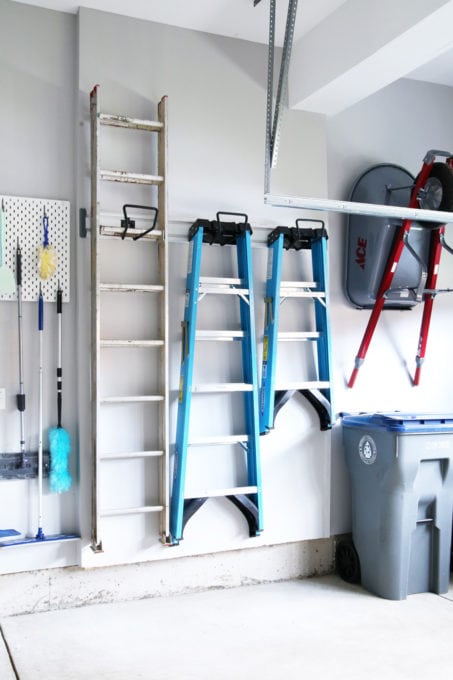 Since one of our main priorities was to be able to park both of our cars in the garage, we wanted to make sure we could do this comfortably. If it was a pain, we wouldn’t do it, would still be stuck out in the cold in the winter, and it would defeat the purpose of all of the hard work we put into our garage organization project.

In order to park both cars comfortably, we made sure that any shelf or hanging units we chose didn’t jut out past the rail for the garage door. We also made sure that a few of the larger items, like our bikes and the hockey net that our son uses, were hanging above the height of the hood of the car (while still within our reach) so that they didn’t get in the way.

As I was answering these questions, I created an outline of our garage and began marking down which “zones” I thought should go where. 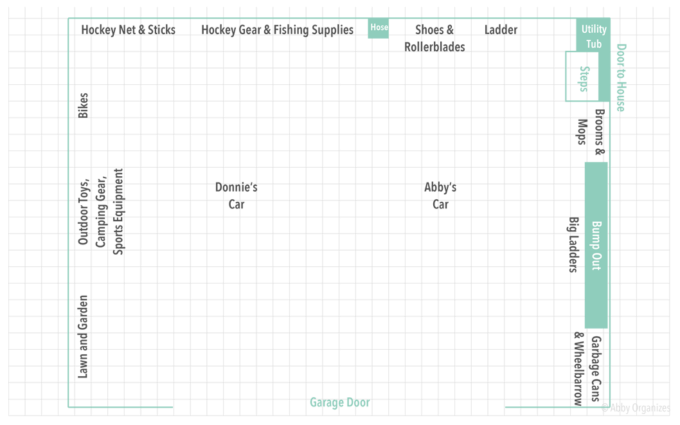 Since I now had a list of everything I needed to store and a rough layout to work with, I could move on to the next step…

STEP 4- DECIDE WHAT TYPE OF STORAGE SYSTEMS WOULD WORK BEST FOR EACH CATEGORY OF ITEMS IN THE SPACE WE HAVE PLANNED FOR THEM.

Figuring out what types of shelves and hooks and bins to use to organize the garage can feel like an overwhelming task all on its own! If you already have some solid storage pieces– great! You’re good to go!

Unfortunately for us, all of the storage pieces we owned previously stayed with our last house, so we were completely starting from scratch. I shared an entire post just about garage storage options and how we decided on the ones we chose, so see that post if you’d like more details, but here is a quick list of storage items you may want to consider:

STEP 5- MAP OUT A DETAILED PLAN FOR EXACTLY WHICH ITEMS TO STORE IN WHICH LOCATION IN THE GARAGE AND WHICH STORAGE PIECES TO USE TO HOLD THEM.

I knew where I wanted each category “zone” to be located, and I knew which storage pieces I wanted to use. Now I needed to combine that information to come up with my final storage and organization plan for the garage. 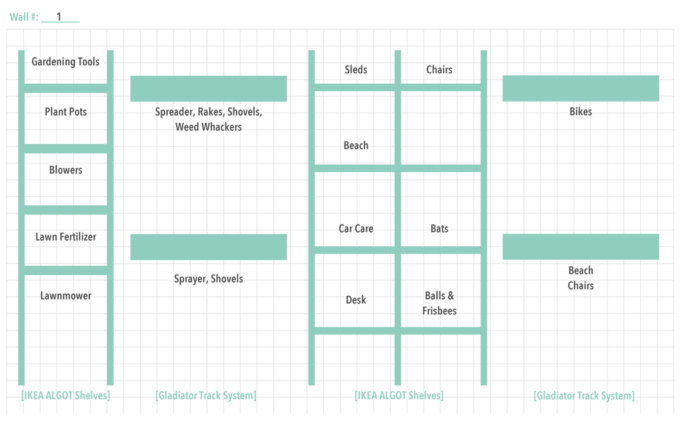 Did my plan work out exactly as I had sketched it out? Nope. As I worked on the garage and put things into place, I realized things that I needed to tweak and change. I made a few extra trips to the store to grab pieces I was missing and return things that I didn’t end up needing. But having a detailed plan helped give me a solid guideline for what to do next instead of being frozen by overwhelm, which was key to getting the project finished!

Once I knew what I was working with and had a solid plan, I just had to execute it! Donnie and I would put specific times on the calendar to work on the garage together to knock it out bit by bit. He would install shelving (lots and lots and lots of shelving), and I would organize all of the items on the shelves and tracks in a way that made sense.

Since we were doing this project over the summer when our kids were home, we usually only had small chunks of time to work on it, but we kept plugging away bit by bit, and though it took longer than we expected, we got it all finished! 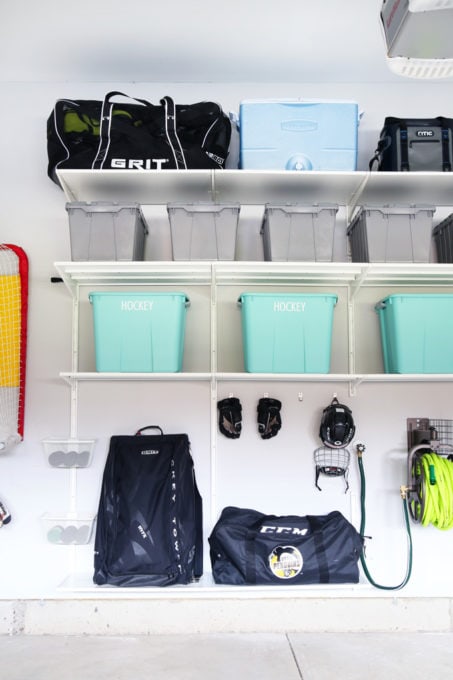 Can projects like garage organization feel completely overwhelming? Yes. But are they impossible? No.

It takes time, effort, and a solid plan, but what I love about projects like this one is that once we put a solid system in place, it will work for us for years and years and years to come!

We’ll be able to find the items we’re looking for quickly. We’ll be able to park our cars in the garage and shield them (and us!) from the elements. I won’t have hockey gear stinking up my house! 😉 So the one time effort more than pays us back over and over again.